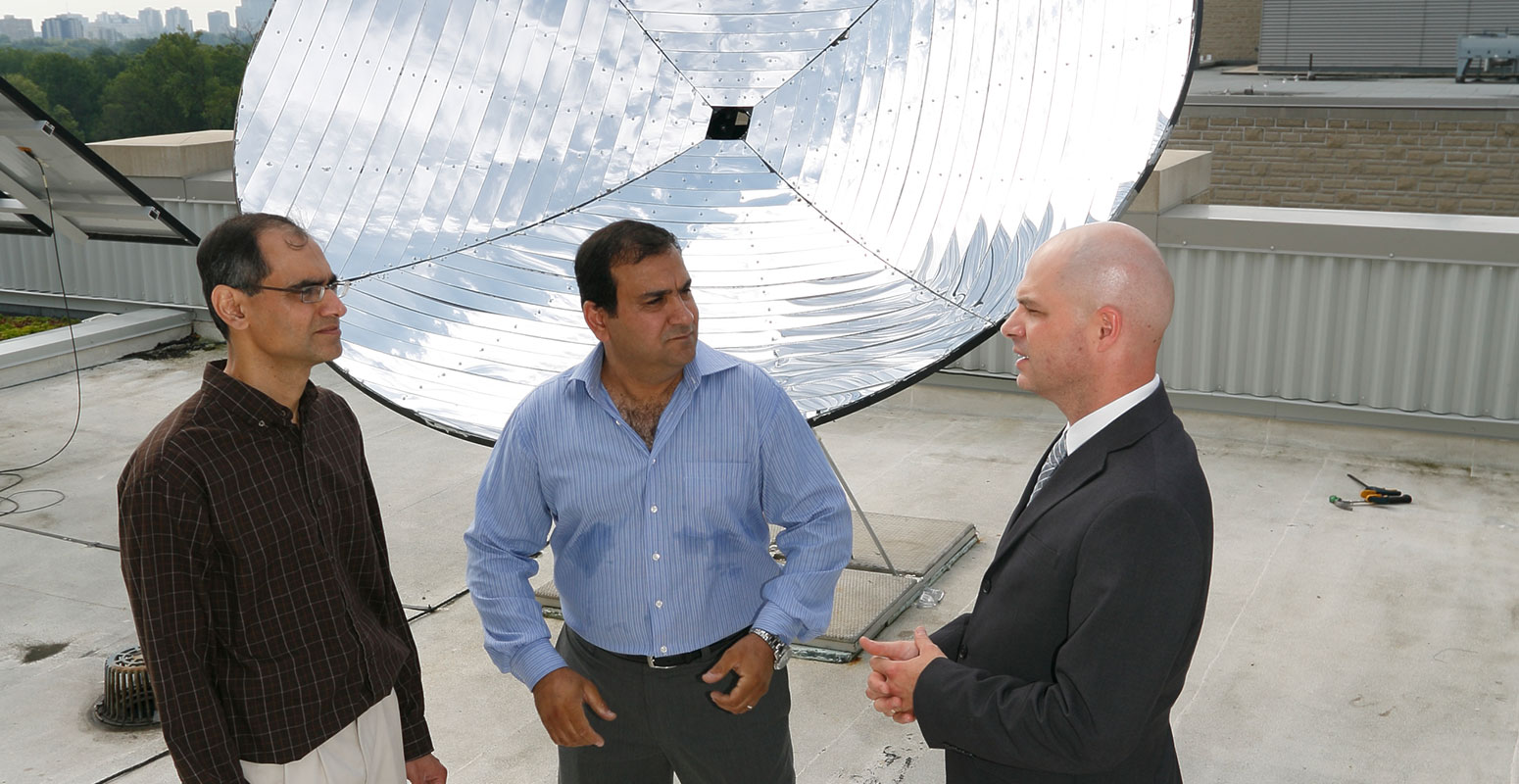 Solar farms are sprouting up across the country at an exponential pace and this push for harvesting greener energy has prompted a Western Engineering researcher to figure out a way capitalize on daylight hours.

As the sun rotates throughout the day, fixed solar panels are not in a position to receive the maximum amount of sunlight.

As a solution, Kamran Siddiqui, associate professor in the Department of Mechanical and Materials Engineering, along with his graduate student Hassan Hassan, has developed a smart solar tracker and a load compensator for solar collectors. These two novel technologies can be used in a variety of solar energy applications, such as photovoltaic (PV) panels, parabolic dishes, parabolic troughs and solar water heaters.

“We have to make sure the collector position is optimized in a way that it can collect the maximum amount of solar energy,” Siddiqui says. “You want to have high efficiency of the system.”

In order to collect the most amount of sunlight, the solar energy systems must be able to track the sun’s movement throughout the day.

When he began researching what was already available on the market, Siddiqui found most had a microprocessor, which uses mathematical equations utilizing longitude and latitude coordinates of the site to calculate the sun’s path at any given time of the day.

“It is an expensive system because you need this computer-based solar calculator,” he explains. “The other thing is you have to be very precise on the longitude and latitude. If you are off … even a small difference could significantly reduce the efficiency of the system, particularly the solar concentrators.”

In order to improve the accuracy of solar tracking systems, Siddiqui developed a simple, smart, cost-effective system that doesn’t rely on a computer and pre-defined coordinates of longitude and latitude. A prototype of the system is located on the roof of the Claudette MacKay-Lassonde Pavilion.

“It basically tracks the sun with sensors and we developed our own control board with a logic circuit, which precisely locates the sun. As soon as it finds the sun, it stays there,” he says.

The system tracks the sun east-to-west along two axes (altitude and azimuth).

“When the sun position changes in reference to the ground, it moves, and as soon as it finds the sun, it stops there,” he continues. “It is continuously tracking the sun.”

The advantage is no computer is needed to implement this system and it can be operated off-grid using a 12V PV panel, which means it does not require a continuous power source.

“The system is smart, so it goes back to its morning position by itself,” notes Hassan Hassan, a master’s student in Mechanical Engineering who worked with Siddiqui to develop these solar technologies. “The system is very reliable and has successfully been through extensive field testing.”

This system could be added to PV panels, which are typically fixed, in order to improve their efficiency, Siddiqui notes. He also foresees applications for telecommunications.

To help facilitate the tracking system, Siddiqui and his student have also developed a complementary load compensator for solar collectors to reduce the load on the motors.

For example, typical parabolic dishes are made from lightweight materials, such as fiberglass, which can be expensive and have issues of durability and withstanding winds. The system also requires a larger motor to operate the tracking system if a receiver is added to the parabolic dish.

His solution – develop a simple and cost-effective load compensator, which is a mechanical system that stores and releases mechanical energy to significantly reduce the load on the motors used to raise and lower the parabolic dish or PV panel. The novel system can carry 60-75 per cent of the collector load, which means only 25-40 per cent will be handled by the motor.

The advantage is this allows for the use of a small size motor, which reduces the operating cost of the system, he notes. It is also possible to adjust the amount of energy stored by the system in order to compensate for extra loading, such as weight added by snow or other add-ons.

Siddiqui is currently working with WORLDiscoveries to bring these two technologies to the marketplace.

“One of the issues with all renewable energies is cost. These technologies will help to reduce the cost and improve the performance,” Siddiqui says. “If you can accurately track the sun, you can increase the efficiency. Using small-size motors is going to reduce the overall cost of your system.”