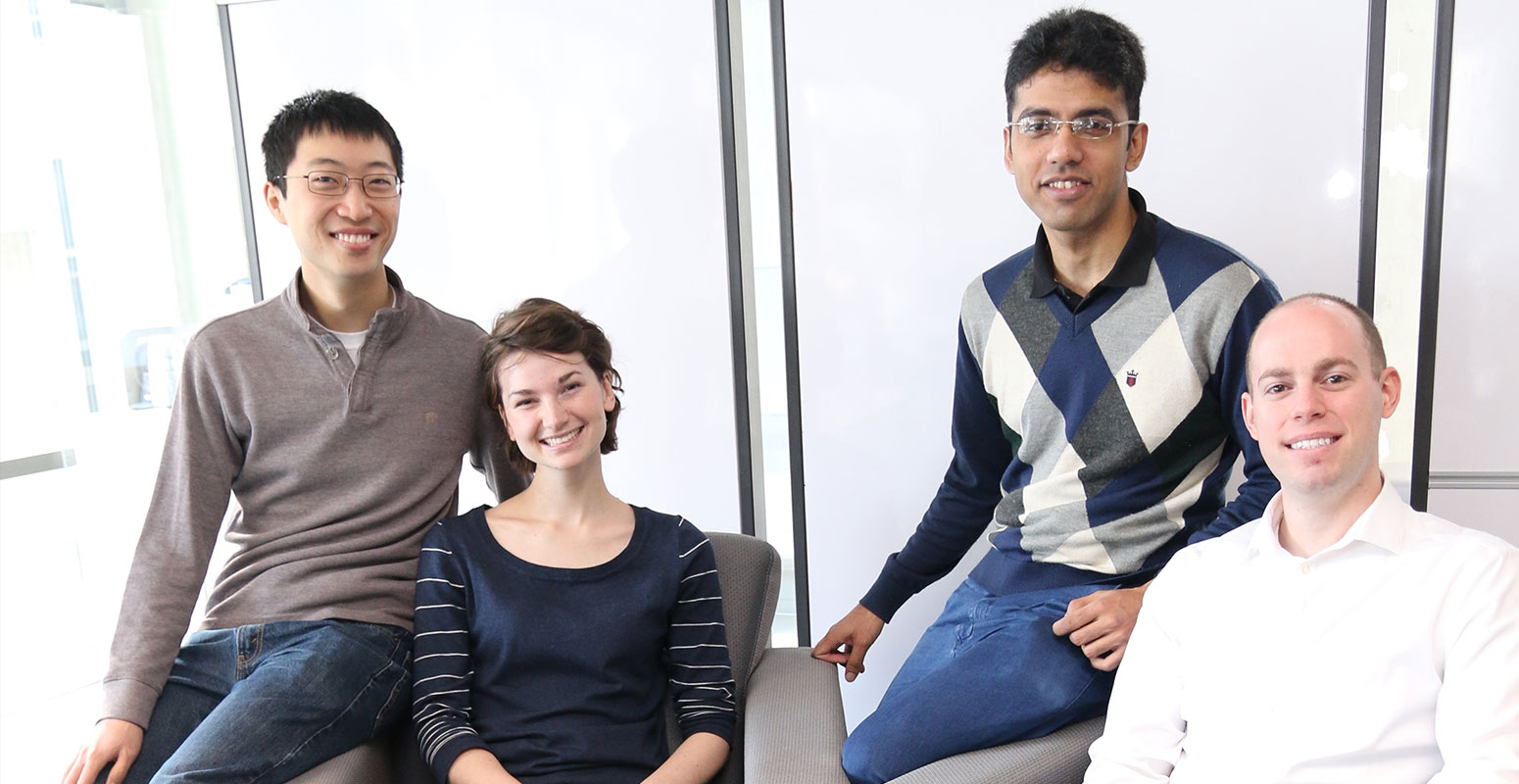 A five-person team of Western students and alumni, including, from left, Bohan Li, Raphaelle Koerber, Gautam Swan and Matthew Lucas, as well as Harrison Kelly, created a winning commercialization plan for OtoTrain, as part of the Proteus Innovation Competition.

Sometimes, as a team of Western students can attest, it takes a new set of eyes on a problem to find a solution for the ears.

The five-person team, including four Western students and an alumnus, created a winning commercialization plan for OtoTrain, a 3D digital anatomy training tool for doctors to assist in diagnosing diseases of the ear, as part of the Proteus Innovation Competition. The technology was developed by Western Professor Hanif Ladak.

“This product needs to be on the market,” said Raphaelle Koerber, a PhD candidate in Health & Rehabilitation Sciences and team captain, noting she was excited about the potential of the technology. “It’s crazy it’s taken this long to get it there. If we can be involved with that, even in a small way that would be wonderful.”

The group, who called themselves Oto-Insight, answered an open call to participate in a competition to define a viable path to market for five close-to-commercialization technologies assigned to WORLDiscoveries. All five of the technologies were developed by Western researchers.

Competitors developed an abstract and business plan, with the successful teams invited to pitch their ideas at a recent event held on Feb. 25. As the winning team, Oto-Insight received $10,000 and has the opportunity to license OtoTrain and form a startup company.

“I thought it was a great opportunity because I am going into the job market next year and I am considering academia options and options in industry,” said Bohan Li, a PhD candidate in Economics. “It’s a great opportunity to see how entrepreneurship works. This is a nice introduction to it – we are given a technology, we don’t have to come up with something ourselves, but then we can work on the commercialization side.”

The judges looked for a team that was well-rounded and presented a good business plan and successful pitch. Oto-Insight fit the bill, with members with backgrounds in audiology, business and economics.

As it is still the early days following the win, the team hopes they will be able to continue some level of involvement in bringing the technology to market.

A research article, co-authored by Ladak and published in the Journal of Otolaryngology – Head & Neck Surgery, states studies have shown only a 41 per cent accuracy rate in pediatric residents’ assessment of ear disease and “only a slight agreement between resident diagnosis and tympanometry” (a test that measures the function of the middle ear).

The software aims to reduce the margin of error, as it gives physicians the opportunity to practice in an online simulation environment, which is less costly than using physical models.

“The software will result in improvements in health care, but only if it is widely adopted through a commercialization plan, such as that proposed by this team,” said Ladak, a Medical Biophysics and Electrical and Computer Engineering Professor.

“Although I had developed a plan long ago, they developed their plan from scratch and brought a new and fresh perspective that differed from my point-of-view. Their perspective will broaden the target markets.”

Proteus Innovation Competition is a result of a partnership between WORLDiscoveries, TechAlliance of Southwestern Ontario, Propel Entrepreneurship at Western, LEAP Junction at Fanshawe College and Western Research Parks.

The competition is a “win-win” for everyone involved, noted Jonathan Deeks, Business Development Manager for WORLDiscoveries.

“The team has had an opportunity to focus and plan and research ahead of a license commitment, free and open-ended (other than the obvious competition deadlines),” he said. “As they share what they are doing, we can see exactly what their plans are, what they are trying to achieve, what their strengths are. It makes the subsequent discussions on startup and licensing seem very collaborative, which is a great basis.”