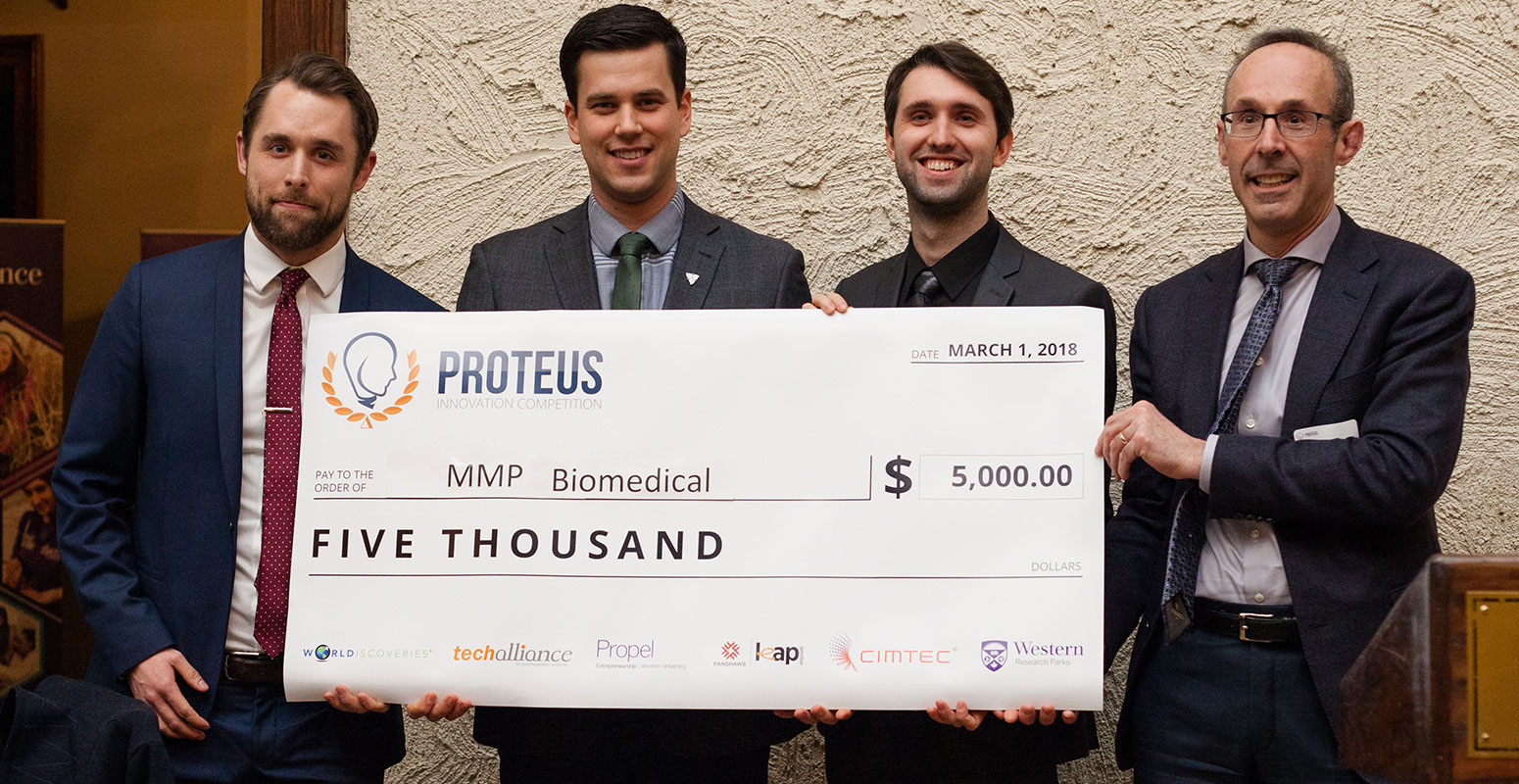 LtR: Contestants Patrick McCunn, Adam paish, and Alex Moszcynski, PhD’17, took one of the tops spots in this year’s Proteus Innovation Competition, an intense four-month competition in which teams define a viable path to commercialization for newly developed technologies. The team was presented $5,000 by David Litchfield, Vice Dean, Research & Innovation for its business and marketing plan for a new tool, developed by Western professor Louis Ferreira (departments of Surgery, and Mechanical & Materials Engineering), intended to improve precision in joint replacement.

After taking one of the top spots in last year’s Proteus Innovation Competition with their plans to commercialize a cloud-based data collection app, the pair returned this year and teamed up with PhD candidate Adam Paish to win yet again – this time, tackling the marketability of a Western-developed tool to improve precision and efficiency in joint replacement.

“We did have a bit of a ringer on our team with Adam, who does orthopedic surgeries in his graduate program,” joked McCunn. “Being scientists, we’ve dipped into the business and tried to learn as much as possible, but this was a fairly technical device and we felt we had the skills to tackle it better than a lot of the other teams, while still maintaining our level of business knowledge we brought to the table.”

The Proteus Innovation Competition is an intense, four-month competition that takes three newly developed technologies and challenges teams to plan their commercialization. It is a partnership among WORLDiscoveries, Propel, Western Research Parks, TechAlliance, Fanshawe’s Leap Junction and Cimtec.

Three winning teams, one for each new technology, were each awarded $5,000.

Paish, a Collaborative Training Program in Musculoskeletal Health Research trainee (Bone and Joint Institute), first came across the specialized tool – called a force guided surgical navigation tool – in the Graduation Innovation Scholars program he completed last year, so had some knowledge about the device.

The device allows for greater automation in joint replacement in the operating room (OR), he said. “It allows surgeons to take an advanced manufacturing approach and apply it to their patients. It’s a small, compact unit that allows for a fully automated reaming, which is the shaping of the bone to accommodate an implant. The device is made so it can be set up to the patient with a preplanning program, you press go and will give you an exact cut to fit the implant.”

Current surgical tracking systems are costly, intrusive, have line-of-sight problems and have several accessories that require sterilization and inventory management. They are bulky and cumbersome, said Paish.

“Our device, because it uses forces measured through a wire connection to the bone, allows the device to be much more compact and not get in the way of the procedure in an already-crowded OR.”

Added Moszczynski, “It would be a dramatic improvement in the OR because it would be way less imposing for the surgeons; it is a lot cheaper; more easily placed in the OR and it’s already more in keeping with the current frameworks that happens in surgery already.

“You could imagine 100 years ago, making cars by hand, they were inferior. As soon as you could mass-produce cars with robotics, everybody started doing it,” he said. “It was faster, cheaper and they were way better at doing it. If you can take one step in the surgery that is most likely to fail and say, ‘Use this instead, it’s going to make your job a lot better,’ why not?”

McCunn was well aware of the time commitment involved in participating in the Proteus competition. But the experience and networking opportunities outweigh the late nights.

“All of us are trying to broaden our abilities in the job market. A lot of the times, when you leave grad school, you have the ability to get hired into a post-doc (position) and not a whole lot else,” he said. “This gives us a degree of credibility when, and if, we want to apply for jobs in industry. You have the technical skills from a technical-based PhD, but bridging that gap and entering industry for a lot of people is quite difficult. So, getting some of that under our belt, and anything that pushes our career forward, is good.”

It can also help in starting a business project, which the three will be doing with their $5,000 prize, putting it towards an education-based website using automation.

Paish said participating in the completion was an eye-opener about the effort needed to get research from the lab to the marketplace.

“It made us appreciate there’s a lot more to it than just saying this technology is great,” he said. “We focused our pitch and business plan to be more about the business itself and how we would create revenue from the technology, as opposed to the device, which is already done. It was a great opportunity for us to get to know the innovation cluster that is already here in London.”