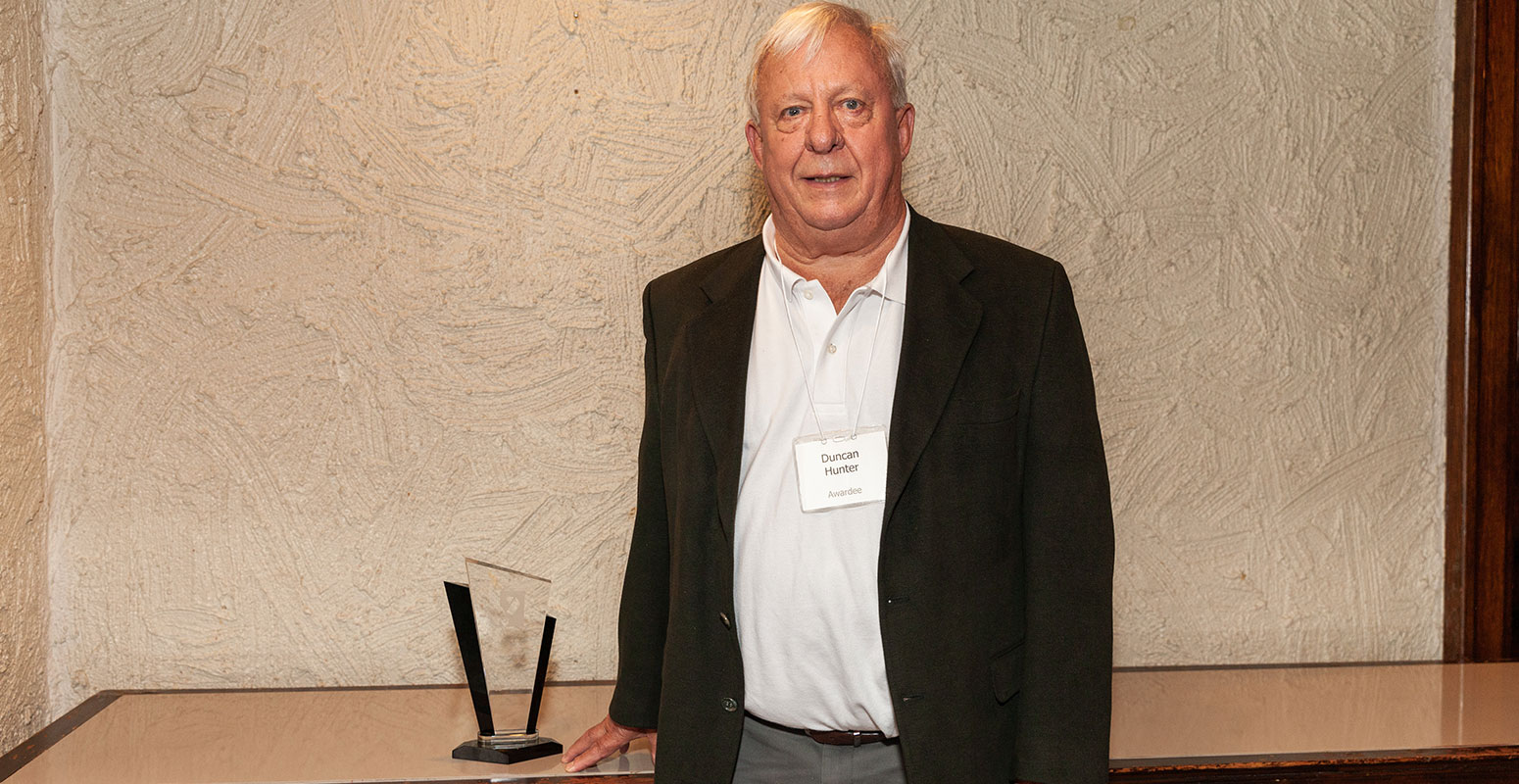 For Duncan Hunter, it has all been worth the wait – and now the university community gets to join in the celebration.

The Chemistry professor emeritus – a researcher who “exemplifies what it means to be an innovator” – has been named the 2019 Vanguard Innovator of the Year for his work in developing the cancer drug Azedra. Celebrated at an event Monday afternoon, the annual honour is presented by WORLDiscoveries.

“Of course, I am very excited – I am so pleased to receive the honour, but I am even more pleased that people are going to be receiving the drug the honour celebrates,” Hunter said.

Three decades in the making, the cancer drug Azedra, developed by Progenics Pharmaceuticals Inc. and based on the work of Hunter, was approved last year by the U.S. Food and Drug Administration (FDA) for patients with rare tumours of the adrenal glands. Although volumes of proprietary information surround projects like these, Hunter hopes the drug is “going out the door soon” – distributed to and used by cancer patients around the world.

“That has always been the goal for me – get that ‘something’ that will be used to help people,” he said.

Established in 2015, the Vanguard Awards celebrate local researchers, who, through partnership with WORLDiscoveries, have achieved various market-readiness milestones.

In the run-up to his award, Hunter has enjoyed making personal connections to previous Vanguard winners:

Hunter has yet to make his connection to Communications Sciences and Disorders professor Susan Scollie, who was awarded the inaugural Vanguard Award in 2015 for her work with the Desired Sensation Level method for fitting hearing aids.

“I joked with the committee that I didn’t think all these connections had anything to do with me winning,” Hunter laughed.

What the connections do, however, is make a strong case for the power of following an idea all the way through to its broader use in society. Hunter, according to Lisa Cechetto, WORLDiscoveries Executive Director, is a perfect example of that.

Hunter choked up a little last summer when it is suggested that work he began at Western three decades ago will now, finally, be applied to saving hundreds of lives. “It’s a good thing,” he told Western News in June. “It took 30 years and had its ups and downs. So, yes, it’s emotional.”

Azedra is “a bit like a magic bullet” for rare adrenal tumours that can’t be surgically removed and require systemic anti-cancer therapy. The compound is highly radioactive and, once injected intravenously is specifically absorbed by, and then attacks the tumour, while the kidneys flush out the material it doesn’t use to kill the tumour cells.

Key to its success is the use of a radioactive pharmaceutical called metaiodobenzylguanidine (MIBG), a compound designed to target only the tumour.

While a form of MIBG has been used for years, one of the main stumbling blocks has been to find a method to produce MIBG in which every molecule carries the radioactive isotope. The Hunter lab developed a specific resin that would hold the precursor to the radioactive material until ready to be converted into the radiopharmaceutical for use by the body.

“We were in group meeting talking about this and said, ‘Wouldn’t it be great if we found a resin for this?’ And a few days later one of my grad students, Paul Culbert, BSc’86 (Chemistry), PhD’92 (Chemistry), said, ‘I’ve found the resin.’”

In the lab, it worked exactly as intended. In subsequent years, several compounds were tethered to the resin. Four of these were patented; and one of those four was selected for upscaling, clinical trials and eventual commercialization.

Hunter and grad student researcher Richard Xizhen Zhu, MSc (Chemistry), PhD’99 (Chemistry), who worked on the compound, filed a patent through what was then Western’s technology transfer office, which has since become WORLDiscoveries.

At that time, the technology transfer office would get involved in patents only if a company were found to invest in the licensing. But scaling up research involving something highly radioactive – with all the inherent and required procurement, security and safety protocols – would not be an easy ‘get.’

“There were very few companies in the world that specialize in radiopharmaceuticals. It’s highly specialized work,” Hunter said.

At the 11th hour, Biostream, a Boston-based company (later re-named Molecular Insight), picked up the licence on the patent and began development, and then clinical trials.

It’s a process that requires a lot of resources, and when Molecular Insight couldn’t stay financially afloat, it appeared as if the project might be over before its time.

In stepped Progenics Pharmaceuticals, which secured the licence and rescued the research, resuming clinical trials at several specialized centres in the United States. Progenics’ results confirmed the effects and benefits of the pharmaceutical, now named Azedra (iobenguane 131).

In Summer 2018, the FDA approved the drug’s use in U.S. patients, under the agency’s fast-track program – intended to speed approval of breakthrough drugs ­­– and under its orphan drug program, intended to help commercialize therapy for people with rare diseases.

Adrenal cancers affect about 1,000 people in the United States each year.

That’s not a large number of patients but it’s significant in lives improved, said Hunter, who holds a total of eight patents (six of them in radiopharmaceutical chemistry and four of those using the resin technology that’s now called an Ultratrace platform).

In a statement, FDA official Richard Pazdur, head of the FDA’s Oncology Centre of Excellence, said Azedra provides patients with the first FDA-approved therapy for this specific use. It is shown to decrease the need for blood pressure medication and reduce tumour size in about one-quarter of patients – people who had exhausted all other medical options.

In short, Azedra offers hope to patients who have had little medical reason for optimism.

Hunter ­– whose CV also includes Associate Dean of Science (Academic), working with two Nobel Laureates in Chemistry and being awarded numerous excellence-in-teaching awards at Western – isn’t satisfied the benefits of MIBG have been fully tapped.

He envisions three possible directions: seeking drug approval in other countries, including Canada; treatment of another type of cancer, called neuroblastoma, which strikes patients’ nerve tissues and, when it appears, most frequently finds toddlers as its victims; or development of one of the other patented materials.

“Each of these would be a major, major project,” he said, and would again require a lot of work.

But Hunter has a lifetime of experience in both patience and persistence. He noted it took 70 years before he found some answers to the wartime death and disappearance of his father, lost in a plane crash in Burma (now Myanmar) as the Second World War was drawing to a close.

Hunter is used to waiting.

“If patience is a virtue, then I’m incredibly virtuous,” he joked.

Patrick Therrien, Senior Business Development Manager at WORLDiscoveries, said Hunter’s work is an example of how long a product can take to go through the testing, development and approvals process.

WORLDiscoveries has, among other tasks, helped manage and update the patent and licencing agreements during the past several years, although this file pre-dates Therrien’s arrival by about two decades.

“This is a major milestone,” he said. “It shows, not only do we have the great research going on at Western, we have a mature technology transfer office and can see this thing through.”