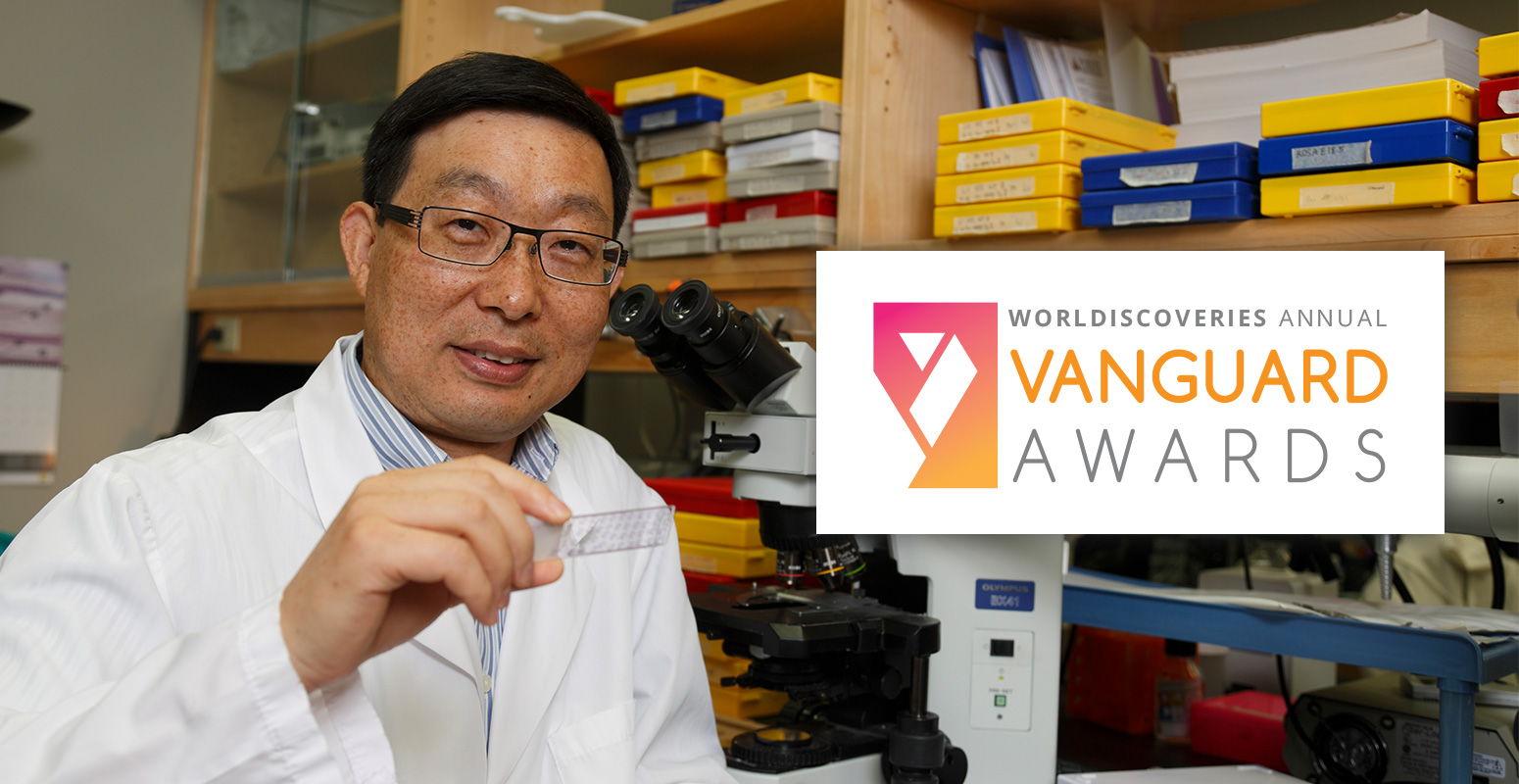 Researcher Dr. Qingping Feng is proof of the axiom it takes years to become an overnight success.

So, he’s willing to wait a while longer, if that’s what it takes, to know for certain that the sepsis treatment he has worked on for more than two decades will save millions of lives.

Feng has been named the 2020 WORLDiscoveries Vanguard Innovator of the Year, an honour that celebrates market-ready research, for his team’s development of the protein annexin A5 into a pharmaceutical that may become the world’s first effective treatment for sepsis, including when it arises as a complication of COVID-19.

Annexin A5 is a human protein with benefits believed to include reduction of inflammation and coagulation.

Feng’s work shows that it could halt sepsis, which leads to a runaway infection that spreads throughout the body, causing multiple organ failure and death.

“So far there’s no specific treatment for sepsis,” said Feng, a researcher at Western University’s Schulich School of Medicine & Dentistry and a scientist based at Lawson Health Research Institute.

Physicians attempt to control sepsis primarily by preventing it, but once it takes hold there is little they can do.

“Various supportive treatments are being used and to some degree they’re helpful – but they don’t actually treat the disease, so that’s a major issue,” Feng said.

“Potentially capturing the largest drug market in history, (Annexin A5) has the potential to save millions of lives and literally billions of dollars each year.”

Yabao Pharmaceutical Co, based in China, has a partnership agreement with Lawson to develop and market annexin-based products in China, Taiwan and Hong Kong. (Lawson has the licensing rights to annexin elsewhere in the world.)

Yabao has completed its phase 1 trial, on healthy humans, and is moving toward a phase 2 trial, this time with patients who have sepsis.

The product could become a treatment option “if all goes well, maybe in about five years,” said Feng.

The annual awards recognize local researchers who, through partnership with WORLDiscoveries, achieve market-readiness milestones in patenting, licensing or selling their innovations.

This year’s ceremony recognized more than 60 individuals for their achievements in diverse disciplines including science, medicine, engineering and education.

“Despite the challenges of our current reality, we at WORLDiscoveries felt it is important now, more than ever, to take the time to recognize those who are helping to make positive change through their innovations,” said Lisa Cechetto, executive director of WORLDiscoveries.  “We are very pleased to have Dr. Qingping Feng as our 2020 Innovator of the Year.  His work on annexin 5 and the partnership with Yabao show real promise for those requiring treatment for sepsis and, initial results indicate, COVID-19 as well.”

Western president Alan Shepard said in a video congratulating the winners that “celebrating achievement in knowledge translation and commercialization is important for everybody, not only for individual researchers and our teams, but also for Western and our partner institutions.

“Raising the profile of our research is certainly a priority for Western,” Shepard added. “People here do extraordinary work and we want to make sure the world knows that and benefits from the research done by Western faculty and researchers.”

Drug research in particular is, metaphorically, a field for long-distance runners and not sprinters, Feng acknowledged. “This is definitely a marathon.”

Feng practised medicine as a cardiologist in China and, with an interest in cardiovascular research, earned his doctorate in pharmacology in Sweden before coming to Canada in 1992.

He began working on sepsis research at Victoria Hospital in 1997, and became excited about the potential of annexin A5 when it showed positive results in a mouse model in 2007.

That’s when he connected with Kirk Brown, now senior business development manager with WORLDiscoveries, about the protein’s potential for commercialization.Along the way, he spoke with more than 10 potential investors.

“That initial staff work is critical in order to expose the intellectual property to the wider community, the scientific community and drug industry. And they have been doing all the groundwork,” he said of the work of WORLDiscoveries.

The project has required several years of funding support and strong teams of diligent researchers – including co-inventors Sharon Lu and then-graduate student Paul Arnold – who start with basic science and hypotheses that sometimes lead to unanticipated places.

In this case, it has also led unexpectedly to studying annexin A5 as a potential treatment for complications of COVID-19.

“Bacterial infections account for the majority of sepsis cases, but other pathogens such as virus can also induce sepsis,” Feng explained. In patients with COVID-19, inflammation can spread through the bloodstream and infect organs, including the brain.

Yabao has just completed phase 1 trials of annexin A5 and, once the company files its report on the drug’s efficacy, Feng hopes it can be submitted to Health Canada for approval of a phase 2 trial in COVID patients here.

He is concerned, though, that funding for basic foundational research is a growing challenge for scientists, with perhaps one in seven research proposals getting support.

“A lot of times, when you are proposing a project, you don’t have a lot of premium data or anything. So, the (funding agencies) say, ‘Oh, this is risky, I don’t see the potential.’ Then you cannot go anywhere, so yeah, that is a problem.”

Without that foundation and support for ideas, he said, it may become more difficult to make the serendipitous discoveries whose usefulness only becomes apparent years later.