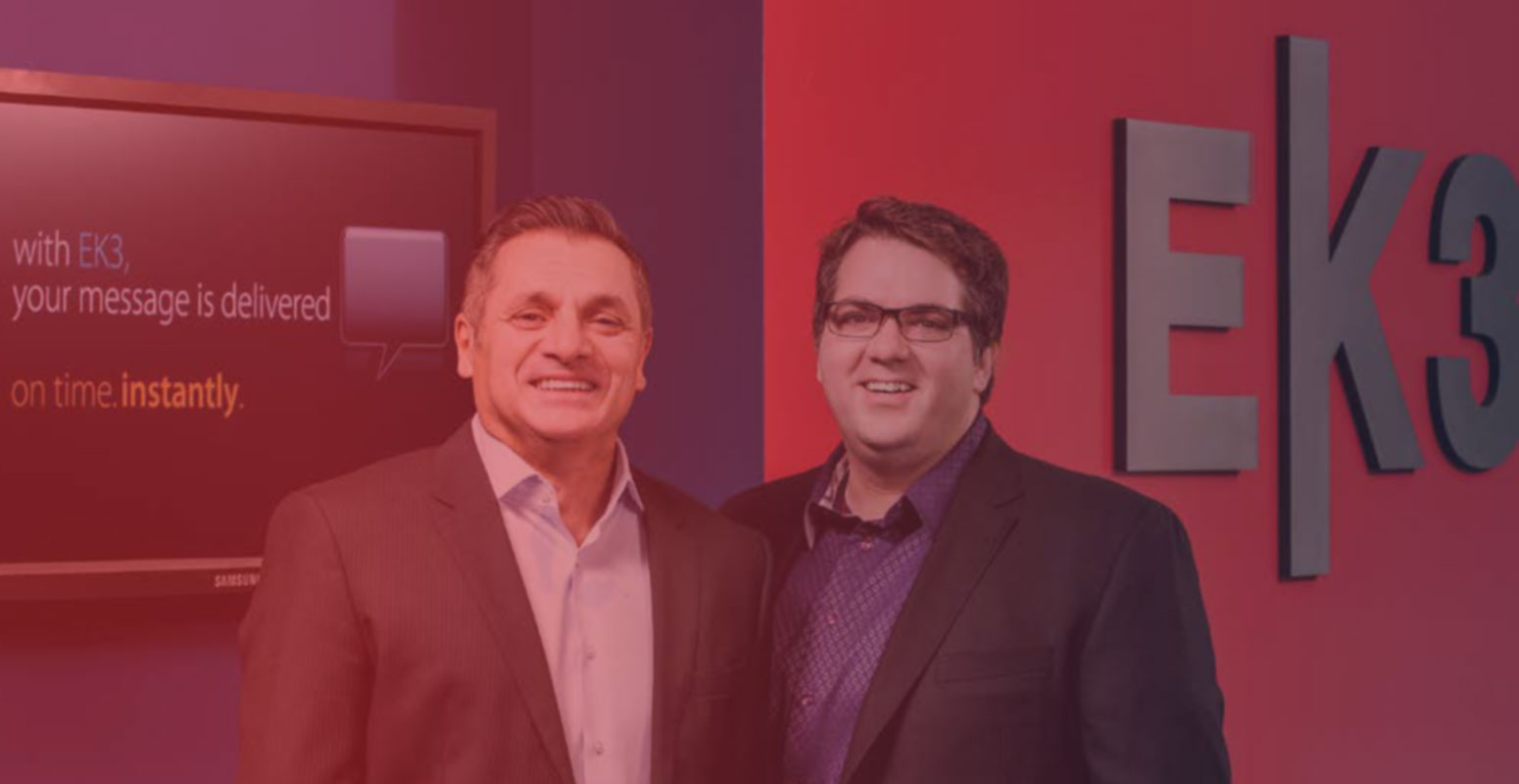 You know EK3 Technologies – even if you don’t realize it.

They employ a concept called ‘narrowcasting’ – narrowly targeted messages to entice you to buy in an environment where you are already a customer. “You have to be able to communicate a message that resonates to the right audience,” says Nick Prigioniero, MBA’03, EK3 president and CEO.

Founded in 1998, EK3 operates across Canada, as well as in 32 U.S. states, the United Kingdom and the Middle East. Its clients include Tim Hortons and McDonald’s, Walmart and Target, RBC and BMO, Sony and Disney, Coca-Cola and Pepsico, and many more.

And now, after years of explosive growth, the London-based company prepares to enter a new phase. In August, Canadian movie theatre giant Cineplex Inc. purchased EK3 in a deal that could approach $80 million.

EK3 took the name from its co-founders – Ed Elliot and Ken Stuart, both MESc’99. Elliot has since left the business; Stuart remains as senior vice president of marketing, innovation and product development.

Prigioniero joined three years after the company’s inception – first as president and COO, then as CEO three months later.

“I think one of the things I was able to bring to the company was a new approach and perspective by rewriting the business plan and focusing on creative, the media and all those things,” he said. “It gave us a bigger scope.”

He turned EK3 into “a hybrid” – a company providing clients with hardware solutions as well as in-house creative.

Growing to 150 employees (nearly 20 per cent of them carrying post-grad degrees from Western), the tech company moved from its offices in Western’s Discovery Park to a downtown location in the London Free Press building in 2004. EK3 also opened a Toronto office in 2007.

“We needed some room. We needed to hire a whole bunch of people. We actually tripled in size the first time we grew.”

And with last summer’s blockbuster deal, that growth looks to continue.

The Cineplex acquisition was a friendly takeover.

“We weren’t looking to be acquired,” Prigioniero admits. “We were looking for growth capital.”

In early 2013, EK3 was working with RBC Capital Markets, eyeing capital to enter into the U.S. market. The company received several offers from U.S. venture capital and private equity firms. But EK3 management didn’t like the deals being offered. At that point, Cineplex entered the picture.

“The more we talked to Cineplex the more we realized there were synergies there between both of us,” Prigioniero says. “We were extremely pleased as we got to know them that they were great people – a Canadian company, well run, great leadership and they saw true value in everything we did. “They saw the content. They saw the technology. They saw the media sales component. They saw everything we did. They put high value on it. So, we’re very pleased with the acquisition.”

While continuing to build on its Canadian base, the company is targeting aggressive growth in the United States, and planning to open offices in Chicago or New York this year. Everything, including creative services, at this point, is run from its Canadian offices.

The company also still has a presence at Western with the EK3 Innovation Lab in the Thompson Engineering Building. That lab enables real-world training opportunities for graduate and undergraduate students as well as professional engineers.

“It was a great resource for us to be able to hire more people,” Prigioniero says. “In the future we’re probably going to explore doing more research at Western, as well as expand research with other universities.

“What’s been part of our DNA has been the tie to academic institutions; Western has been able to keep that alive for us.”