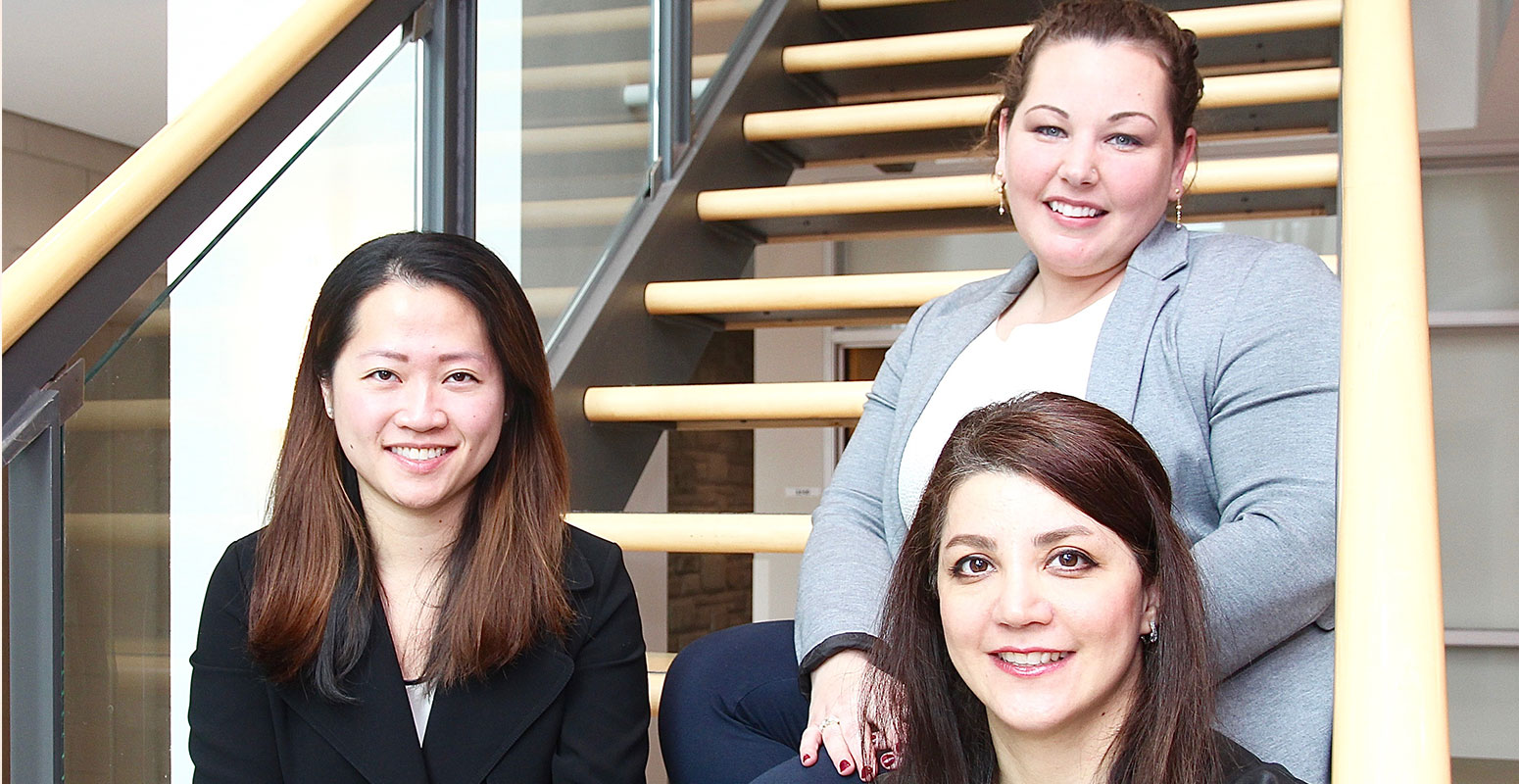 Three Western students reflected their best work in developing a winning commercialization strategy for a mirror box used in lower-extremity therapy, earning them one of the top spots in the annual Proteus Innovation Competition.

The competition – a partnership between WORLDiscoveries, TechAlliance of Southwestern Ontario, Propel Entrepreneurship at Western, LEAP Junction at Fanshawe College and Western Research Park – brings together students to compete in finding a viable path to market for close-to-commercialization technologies assigned to WORLDiscoveries. All the technologies were developed by Western researchers.

Esther Lau, along with Ashley Hannon and Solmaz Karamdoust, teamed up to take on the intense four-month commercialization challenge.

“The whole year, our mindset has been how to bring medical technology to the market,” said Lau. “We were excited to have a chance to work on this. It was a great learning opportunity as they guided us through how to create a business plan and how to do a business pitch.”

The trio is part of Western’s Medical Innovation Fellowship program, which immerses talented young scientists, engineers and clinicians in a training and research-heavy environment with the goal of developing future leaders and innovators of world-class medical technologies.

Former Western graduate student (Health and Rehabilitation Sciences) Lucas Crosby shows off a version of mirror box technology used in lower-extremity therapy. He worked on this therapy approach with former Western adjunct research professor Dr. Kara Patterson. Crosby is now completing his PhD at the University of Toronto, where Patterson is an assistant professor in the Department of Physical Therapy.

“The key learning point is how to define the problem we’re solving,” added Lau. “For us, we’re learning what the technology is now, but we have to go back and understand the inventor’s mindset as to what they thought, why did they tackle this program and what was their solution to the problem they are trying to help out.”

The principle of mirror therapy is as it sounds, the use of a mirror to create a reflective illusion of an affected limb in order to trick the brain into thinking movement has occurred without pain. It involves placing the affected limb behind a mirror, which is sited so the reflection of the opposing limb appears in place of the hidden limb. Initially invented to deal with phantom limb pain, this latest application focuses on assisting stroke patients with lower-extremity therapy.

Hannon said there’s more to commercialization than just knocking on the doors of physicians and saying, ‘Here’s a solution.’

“First of all, what’s the problem we’re trying to solve? What marketable product are people interested in?,” she said. “We spent a lot of time communicating with physiotherapists.

“It was helpful for us to talk to people in the field, especially from a physiotherapist point of view. Being able to ask them (about) what are you doing now, what if you had this device, they offered a lot of valuable advice. We had to use that approach as a way to validate what the need is. You can’t replace talking to people.”

Karamdoust added it was great to take what she’s been learning through the fellowship program and put it to the test. The fact she brings a chemistry background to the mix – along with kinesiology and medicine from Hannon and Lau – only added to their success, she determined.

“I think it’s great to have that sort of diversity within our group,” she said, adding if you want to drive top technology to the market, you need to know the obstacles. And three areas of expertise help. “It allows us to fill in the gaps with each other and contribute in terms of our own strengths. Having this different expertise is always a plus.”

Along with receiving $7,500, the three have the opportunity to license the technology and form a startup company, should they choose. While medical device innovation is a pretty risky field, the group plans to keep an eye on the progression of the mirror box technology, which is still early in the creation process and would require larger clinical trials.

“We’d be interested to see what the next stages will be, with more clinical data,” said Lau. “It’s within the timeline we set out in our business plan. More clinical data, a final product design, the need to get a distributor – each milestone is different.”